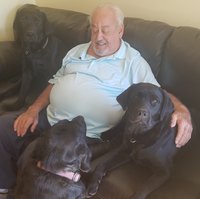 Pete and his wife operated Pete's Burner Service for many years. Pete loved camping, he and his wife traveled the country with favorites like Maine and Cape Cod being a frequent stop. He loved his pets and  his yearly Christmas light displays.

He is survived by daughters Pearl and her husband Kurt Taylor of Smithfield, VA, Debra and her husband Earl Collelo of Plainfield, CT, Sandy and her husband Dennis Benoit of Paxton, MA; five grandchildren Shawna, Michele, Tanya, Corey and Caitlin, ten great grandchildren, his sister Lucille and many nieces and nephews. He was predeceased by a brother and a sister. Funeral Service will be at a later date. Donation maybe made in his memory to the American Heart Association, P.O. Box 417005 Boston, MA 02241-7005. Share a memory at www.gagnonandcostellofh.