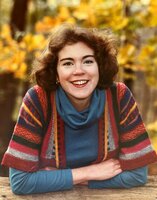 Dale Cannon MacQueen passed away in the arms of her loving husband Tom on October 26, 2022 at their home in Woodstock, CT.

Dale was born on March 11, 1951, in Jersey City, NJ, the eldest of four girls, and spent her early years in New Jersey and Pennsylvania.  Her family moved to Darien, CT when Dale was in high school and she graduated from Darien High School in 1969.  She went on to graduate from the University of Connecticut (UConn), earning both her bachelor’s and master’s degrees.

While studying at UConn, Dale met fellow student Tom MacQueen during an ultimate frisbee match.  They became best friends and married on October 11, 1980 next to a pond in the woods near their home in Ashford, CT, with family and friends in attendance.

Dale and Tom bought their first house on Quasset Lake, in Woodstock, where they have resided since 1983.  Seeing the lake and the surrounding foliage and wildlife from their house and porch overlooking the water brought Dale much pleasure throughout her life.  Their daughter, Kyle Linn MacQueen, was born in the spring of 1985.

Dale spent the first years of her career as a dietician at Day Kimball Hospital in Putnam, CT.  She later made a career change as an educator and became an instructor at Data General Corporation, one of the first minicomputer firms of the late ‘60s.  Dale later acquired her teaching certification and held long-term teaching assignments at Woodstock Middle School and Woodstock Academy.  The flexibility of these roles allowed her to attend all of Kyle’s sporting events throughout middle and high school; she loved watching and cheering for her daughter.  Before retiring in 2016, Dale spent the last 15 years of her career as a Tutor at The Rectory School, a private boarding school, in Pomfret, CT, where she also helped coach the Cross Country and Track and Field teams.  Dale was devoted to her students from around the world, and made many lasting friendships with her students and their families.

Dale enjoyed reading (especially mysteries), playing guitar, gardening, and was a huge animal lover, always enjoying the company of dogs and cats in her home throughout her life.  She especially relished vacations with Tom in Mexico, as well as visiting family in California, Pennsylvania (where she had fond memories of childhood camp), North Carolina, and New Hampshire.

She was preceded in death by her parents Linn and Joe Cannon.

She was beloved and is survived by her husband, Tom MacQueen, her daughter Kyle Feldman (William), grandson Landon, her three sisters: Page Cannon (Jeanne North), Hope Brown (Doug), and Lisa Nelson (Mark), and also three nephews and many cousins.

A memorial celebration of life will be held at a later date.  Gagnon and Costello is handling arrangements.  In lieu of flowers or gifts, the family requests that memorial contributions in Dale’s honor may be directed to the Environmental Defense Fund.