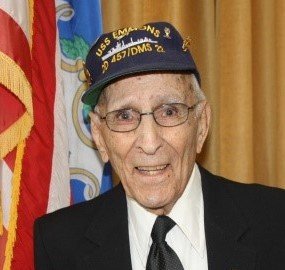 Armand Joseph Jolly, 98, of Pomfret Center, died peacefully on Saturday, December 26. Armand was beloved by his family, friends and many acquaintances; he was a loving husband and father, proud member of the US Navy, dedicated employee of the CT Department of Transportation, and cornerstone of the Pomfret community.

His parents, Beatrice and Noe Joly, were originally from Canada, moving to northeastern CT in the 1920s. Born on September 23, 1922, Armand was one of ten children.

Armand married the love of his life Elsie Murray in 1947 and together they raised two children, Wendy and Dennis. Despite working long and unpredictable hours as a maintainer for the CT Department of Transportation, Armand always made the time to be involved with his children’s many sports and other activities. Armand and Elsie’s love and devotion to each other grew over their 68 years of marriage. It spread as their children married and had their own children and grandchildren. Armand became Dad, Grandpa, Papa, Pop and Great Grampie.

Armand served bravely and honorably in the US Navy, enlisting at age 19 after the bombing of Pearl Harbor. He served as Gunner’s Mate Third Class on the USS Emmons DD-457, DMS-22, a destroyer/minesweeper during World War II. He was part of five invasions – in Africa, Italy, Normandy, southern France, and Okinawa. On D-Day, the Emmons helped to secure the invasion route for US troops on Omaha Beach. On April 6, 1945, during the battle of Okinawa, the Emmons was struck by five kamikaze planes. Sixty of the Emmons’ crew perished and 77 were wounded. Armand survived the attack, suffering injuries to his hands and face. He received several commendations and awards including a Purple Heart. Despite his bravery, he never talked about his experiences until much later in life.

In July 2019, he had the incredible honor of returning to Normandy 75 years after his first trip there, courtesy of Joe Massaro, regional director with Money Concepts. While there, Armand saw the US Navy monument at Utah Beach that includes the name of the Emmons, and stood on Omaha Beach, where the Emmons was actively engaged on D-Day. He was moved to tears when French military officials honored him during the daily flag-lowering ceremony at the Normandy American Cemetery and Memorial.

Armand was a role model for each of his family members. They were fortunate to have had him in their lives for as long as they did. Happy memories of family gatherings at his home in Pomfret and his beloved cottage at Quaddick Lake in Thompson will be a constant source of joy and comfort. So, too, will be his many words of advice, freely given. They include: Do what you have to do. Don’t be afraid, just do it. Make friends – and get along. Have fun – and don’t hurt anyone. It’s a beautiful world. But his most commonly heard words were, stated simply and emphatically: I am fine! and I love my family!!

A memorial service will be held in late spring/early summer, when it’s safe for all of his family, friends and many acquaintances to come together to remember and celebrate him.

Share Your Memory of
Armand
Upload Your Memory View All Memories
Be the first to upload a memory!
Share A Memory