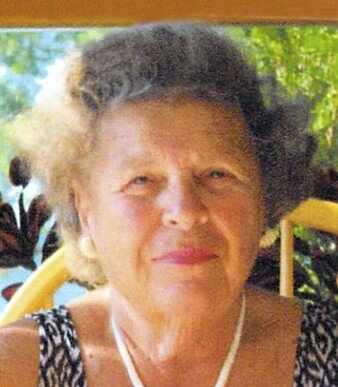 Evelyn Richards Russell died on December 6, 2021, at the age of 101. She was born July 6, 1920, to Claire and Ernest Richards of Putnam, Connecticut. She attended schools in Putnam and graduated from Putnam High School. She entered college as a major in French, but switched to her passion in life which was music, graduating with a degree from the New England Conservatory of Music in Boston.

It was while attending college in Boston that she met the love of her life, Aldo Russell. They married in 1943 in Putnam. Al was a captain in the Army and they moved to Oklahoma while he was stationed there. They returned to Connecticut after the war and eventually built their family home at Putnam Heights.

Evelyn worked as a music educator while Al developed the family business into the City Beverage Company. The couple had two sons, Mark and Jesse. Evelyn was devoted to her family and to her community in Putnam. She was president of the Womens Club and volunteered in many community projects and events, but she always had a home-cooked meal for her family in the evenings.

Evelyn was very active in supporting the Day Kimball Hospital. She and her good friend, Gertie Margolick, presented annual events to raise funds for the hospital. 'The Caberet' was one which showcased her musical talents as well as those of the hospital staff.

Evelyn and Al's home was a center of social and intellectual life in Putnam. There were regular bridge matches. Evelyn was a crackerjack bridge player. Other gatherings in the evening featured stimulating discussions with prominent town members. Besides bridge, Evelyn enjoyed traveling with her husband, traveling far and wide to many corners of the world. Evelyn and Al enjoyed a long retirement together. They spent their winters in Redington Shores, Florida, and their summers at their cottage at Webster Lake in Massachusetts, Evelyn's favorite place.

Evelyn is predeceased by her husband of 58 years. She is also predeceased by her two brothers, Paul and Jim, by her son Mark and by her niece Jan. She is survived by her son Jesse Russell and his wife Leslie, her granddaughter Jessica Hernandez, her grandson Evan Russell and his wife Kristen, her nieces Cynthia Wood and Barbara Eslinger, and her great grandchildren Juliana Hernandez, and Megan, Benjamin and Kathryn Russell.

The family would like to thank the staff of Virtua Rehabilitation in Berlin, New Jersey for the excellent care they provided her in the last years of her life. They will all miss her daily serenades on the piano.

A graveside service will be held in the spring. Arrangements are by Smith and Walker. Contributions may be made in her memory to the development fund of the Day Kimball Hospital in Putnam, Connecticut.

Share Your Memory of
Evelyn
Upload Your Memory View All Memories
Be the first to upload a memory!
Share A Memory