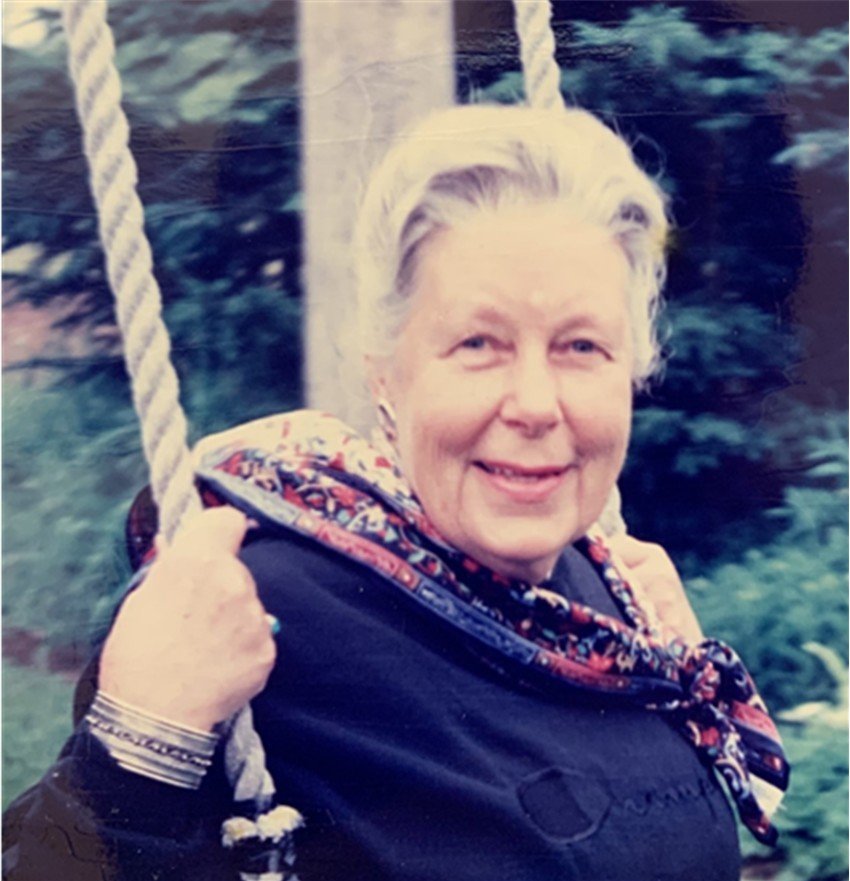 Lois Mary Siegmund (née Schramm) died February 18, 2020, at age 95, surrounded by the family who delighted in the charm and intelligence of her company for so many years.  Her loss is sharply felt.

Born January 13, 1925, in Irondequoit, New York, the only daughter of Herbert and Edna Schramm, Lois, whose first word was “streetcar,” grew up loved and secure, a circumstance she often remarked brought her confidence and a sure sense of her place in the world. As a child, she loved to roller skate and cut out paper dolls, which she said helped with manual dexterity later in life. A studious individual always, she was top of her class at Benjamin Franklin High School in Rochester, New York, where in 9th grade she met Walter P. Siegmund, who, after a prolonged courtship, became her husband of 62 years until his death in 2012.

Unusual for the time, Lois studied chemistry at the University of Rochester, earning a master of science degree in organic chemistry in 1945. During that time, though Walter got lost going to pick her up for their first formal date, he nonetheless took her to the university Christmas dance and presented her with a box of chocolates, a tradition they maintained throughout their marriage on the same date every year.  Before Lois and Walter married in 1950, Lois worked teaching chemistry at Genesee Junior College in Batavia, New York, where she became interested in a career in teaching.

After her marriage, Lois went on to the Kodak Company in Rochester, New York, for several years, working in the cellulose acetate development lab, a job she regarded as essential in providing her with rigorous laboratory experience. In the meantime, Walter earned his doctorate in optics and accepted a job with the American Optical Company in Southbridge, Massachusetts, where the couple moved in 1953. Their first son, Paul, was born there in 1955. Before their only daughter Lisa was born in 1957, Lois and Walter purchased and moved into their home in Woodstock, Connecticut. Several years later, after their second son, Kurt, was born in 1961, Lois accepted, first, a part-time and, soon, a full-time job teaching science and math at the Woodstock Academy, a position she held until her retirement in 1995.

Sure of her ideas and values, an innate optimism and balanced pragmatism supported the strength and guidance she freely offered friends and family. She was passionate in her politics, courageous in her views, never timid in speaking her mind, yet always full of warmth and humor. Outside of her professional identity, Lois enjoyed gardening, recipe hunting and cooking, playing bridge, reading across genres and international borders, watching and discussing films, traveling with her husband, deliberating politics, working on crossword puzzles, and engaging in conversation that ranged across broad topics from the domestic to the philosophical. Extraordinary in her breadth of interests and in her ready, full embrace of life, in her humanity and her straightforward and honest assessment of people and the world, in her determination to live abundantly and generously, Lois was an individual unparalleled and irreplaceable.

She is survived by her New York family, Susan Siegmund, of Webster, New York, and Laurie Anderson, husband David, and their children Denise, Chelsea, and Kara of Ontario, New York; by her eldest son, Paul Siegmund, stepsons William and Glen Cook, and step-grandson Alexzander Cook of Falmouth, Massachusetts; by her youngest son, Kurt Siegmund, daughter-in-law, Diane Eddy Siegmund, and granddaughter Clara Siegmund of Pomfret, Connecticut; and by her only daughter Lisa Siegmund of Hampton, Connecticut, with whom she lived for the last six years of her life.

For those wishing to remember Lois with a gift, we ask that you make a contribution to your local public library. A Celebration of Life service will be held in Lois’s honor at the Inn at Woodstock Hill on Saturday April 18, 2020, from 1 to 4 p.m. Share a memory with her family at www.smithandwalkerfh.com

Share Your Memory of
Lois
Upload Your Memory View All Memories
Be the first to upload a memory!